01:15am, 21 of July of 2022. I was wrapping up some work, and was ready to go to bed. Just before closing the laptop I opened Twitter, and I read this tweet PyQuant News 🐍 on Twitter. 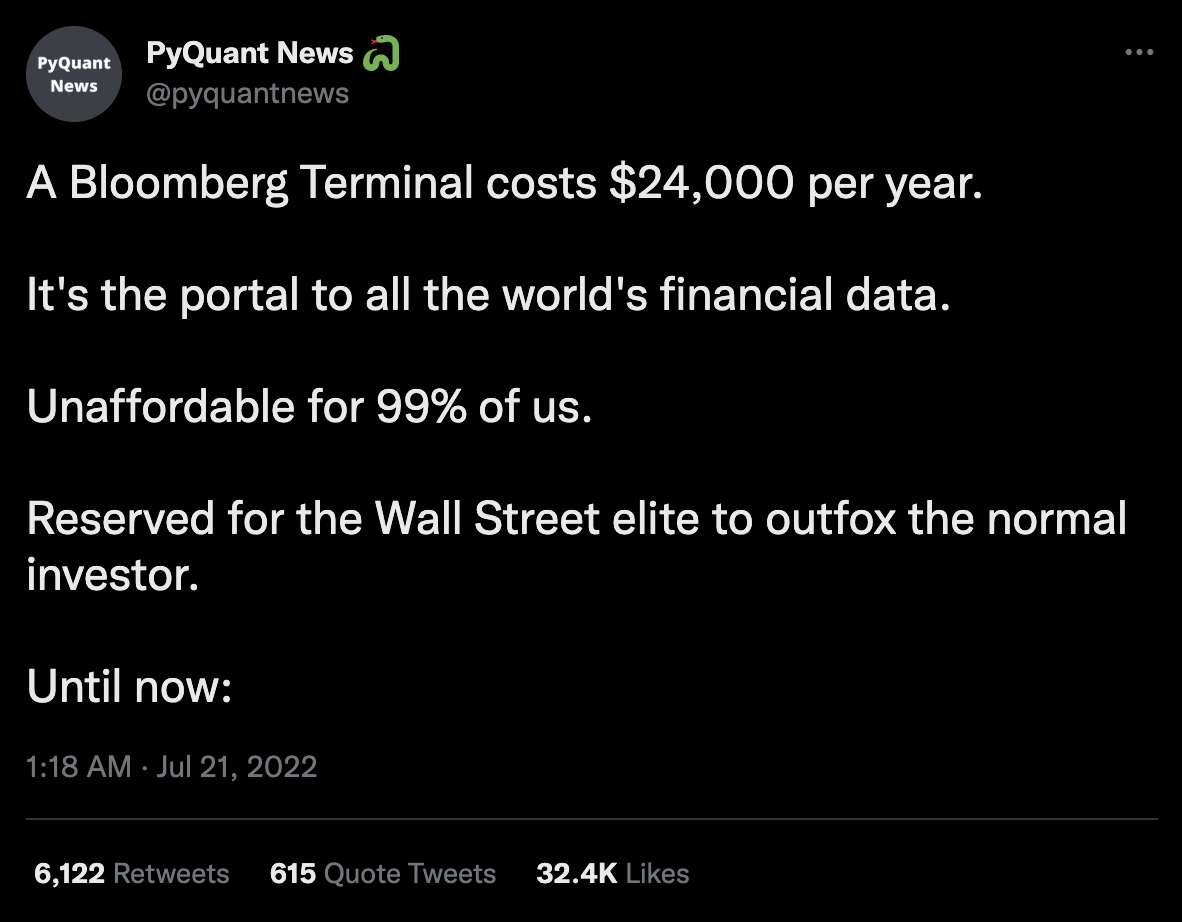 My reaction was: "Holy...". I was used to users mentioning us on Twitter, Reddit & Discord. But this was different. This was a simple and concise walkthrough of the functionalities of the platform using a Twitter thread. Honestly, better than any that we had done ourselves.

I knew that this was amazing from a feedback perspective because this user knew what we stood for, and understood our mission to democratize investment research. In addition their description read: "Python for quant finance" which I was confident that we were the best tool since OpenBB Terminal was python and fully open source. Plus, OpenBB SDK could be easily used for their quant finance code examples.

But, wow. That thread run around the world and back. 15 Million impressions. Some members of the team spent most of the following day answering user questions on that thread. As a result from it, the original poster saw their Twitter account double in size overnight.

This was our first interaction: 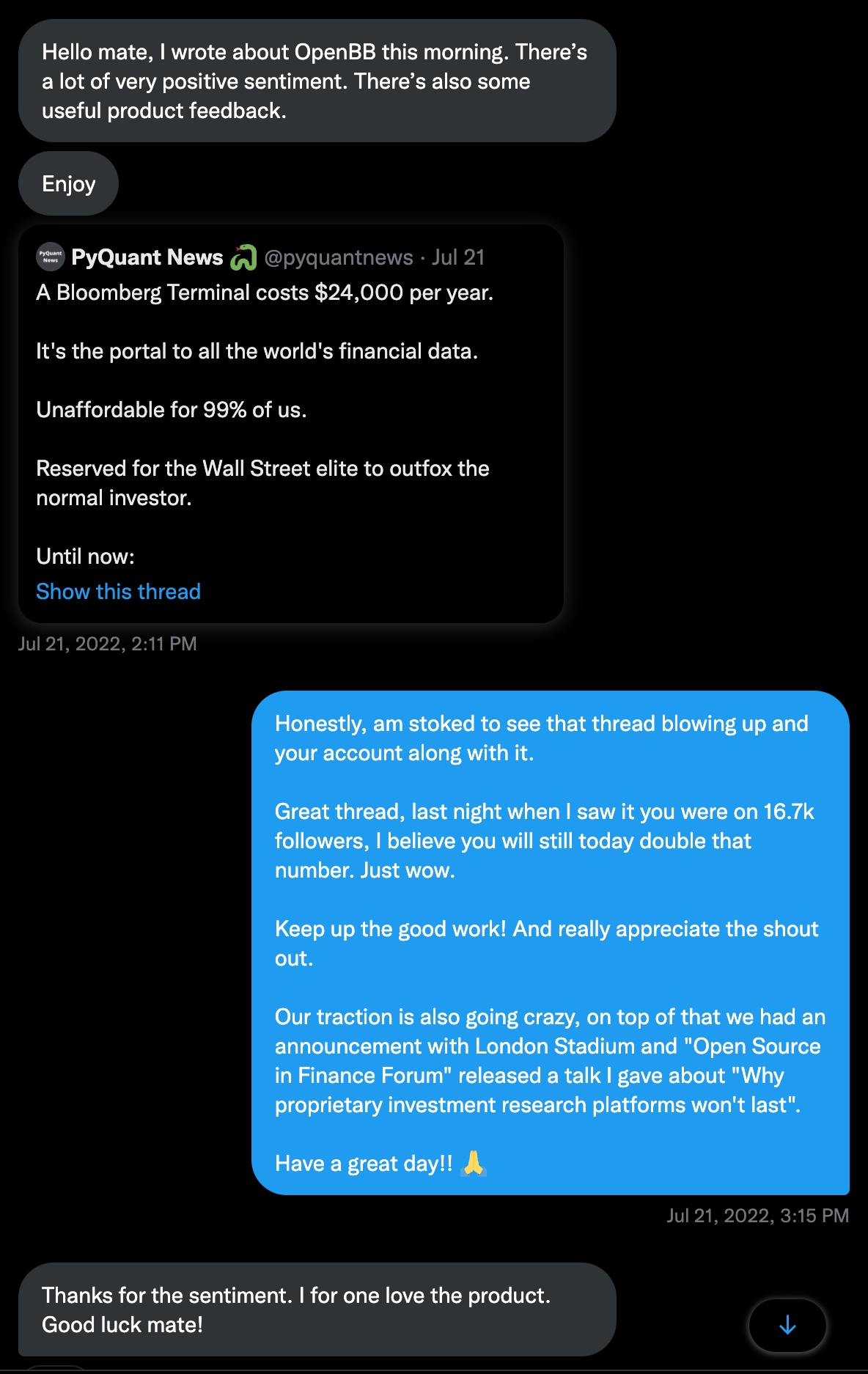 Insights about "The 30m call"

Part I - Jason, the person behind PyQuant News

After a couple of other messages, we had an introductory call. I went from talking with PyQuant News to talking with Jason.

He told me that only this year he has started to put the effort in his twitter account @pyquantnews, which is growing extremely fast. The secret? "Consistency and focusing on a niche", he said.

However, there's more to it, Jason is a Head of Startup Data Strategy at AWS and has a family. He wakes up extremely early to write content for his users and has processes in place to focus and remove distractions. In my opinion, the secret is working on a noble mission that you truly believe in with every cell of your body. Mine is democratizing investment research, Jason's is demystifying that you need a $ 90,000 degree to do quant finance.

Didier: Where do you plan to take PyQuant News?

Jason: I'm interested in creating a "Getting Started with Quant Finance" course

Didier: That makes sense. Focus on how people can use python and notebooks for Quant Finance (...)

Jason: No... I want to focus in the step prior to that. Often people take courses for the sake of taking courses, but they never truly learn. I want to focus on teaching them how to get out of the tutorial hell. We will of course do that with python and apply it to Quant Finance. But I want to guarantee that my students don't need other courses after this one because they have the tools to navigate on their own

The rest of our call was used to discuss possible collaborations.

One thing that Jason got very excited about was the OpenBB SDK. Being able to access OpenBB Terminal in a programatic fashion from a jupyter notebook, was something that would save him a lot of time and make the life of his students much easier.

From our end, we asked Jason if he could relay the feedback regarding OpenBB SDK and the documentation. This would allow us to be able to iterate faster and improve on our product.

From Jason end, he asked if I could appear in one of his classes. To which I replied an easy yes. But unlike what I was expecting that Jason wanted me to solely demo OpenBB Terminal and OpenBB SDK, Jason asked me to explain my background and how I started OpenBB. I.e.:

And then yes. Dive into OpenBB Terminal and OpenBB SDK. It's important to understand that Jason wants to preserve the identity of his course at all costs.

Getting Started with Quant Finance" course

The session was very fun and everyone was very excited for being there. I felt the energy in the course from the first minute I joined. Jason was on the call early and was already telling all the students that he would stay after the call as long as necessary in order to have them setup with Anaconda to learn Python.

In this meeting Jason covers some Python basics for 15 minutes and then he introduces me. That is when I talk about myself (based on points previously agreed) and proceed to doing a demo of OpenBB Terminal but also OpenBB SDK.

I expect PyQuant News and OpenBB to grow together over time. Our mission is very different, but the users overlap and there's mutual interest of growing that user base together. 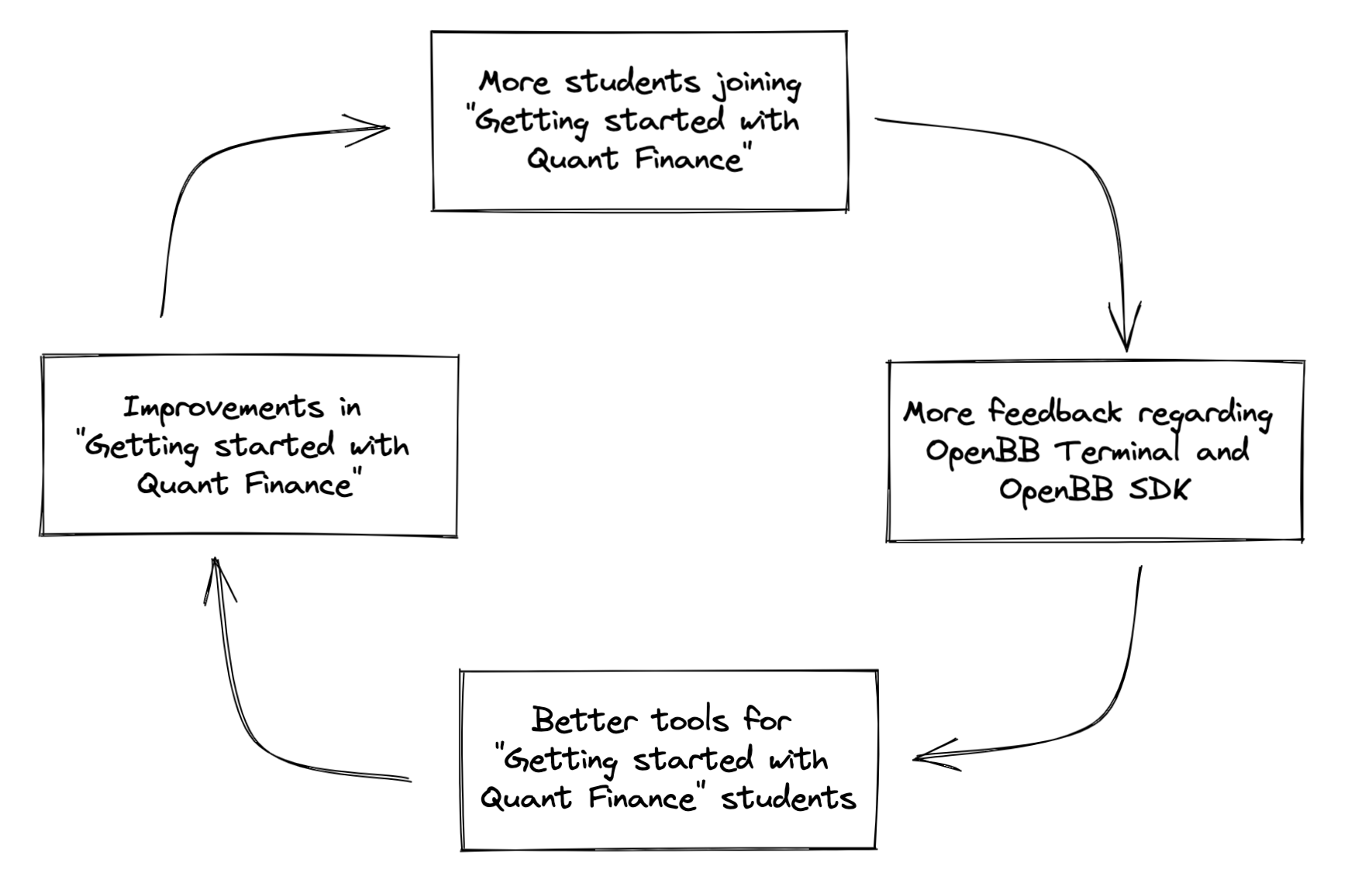 We are happy to announce that the OpenBB SDK will be utilized in PyQuantNews's "Get started with Quant Finance" course which you can find more information about here.

NOTE: There is no affiliation between OpenBB and PyQuant News. Think of this as a "10/10 would recommend" review on TripAdvisor.